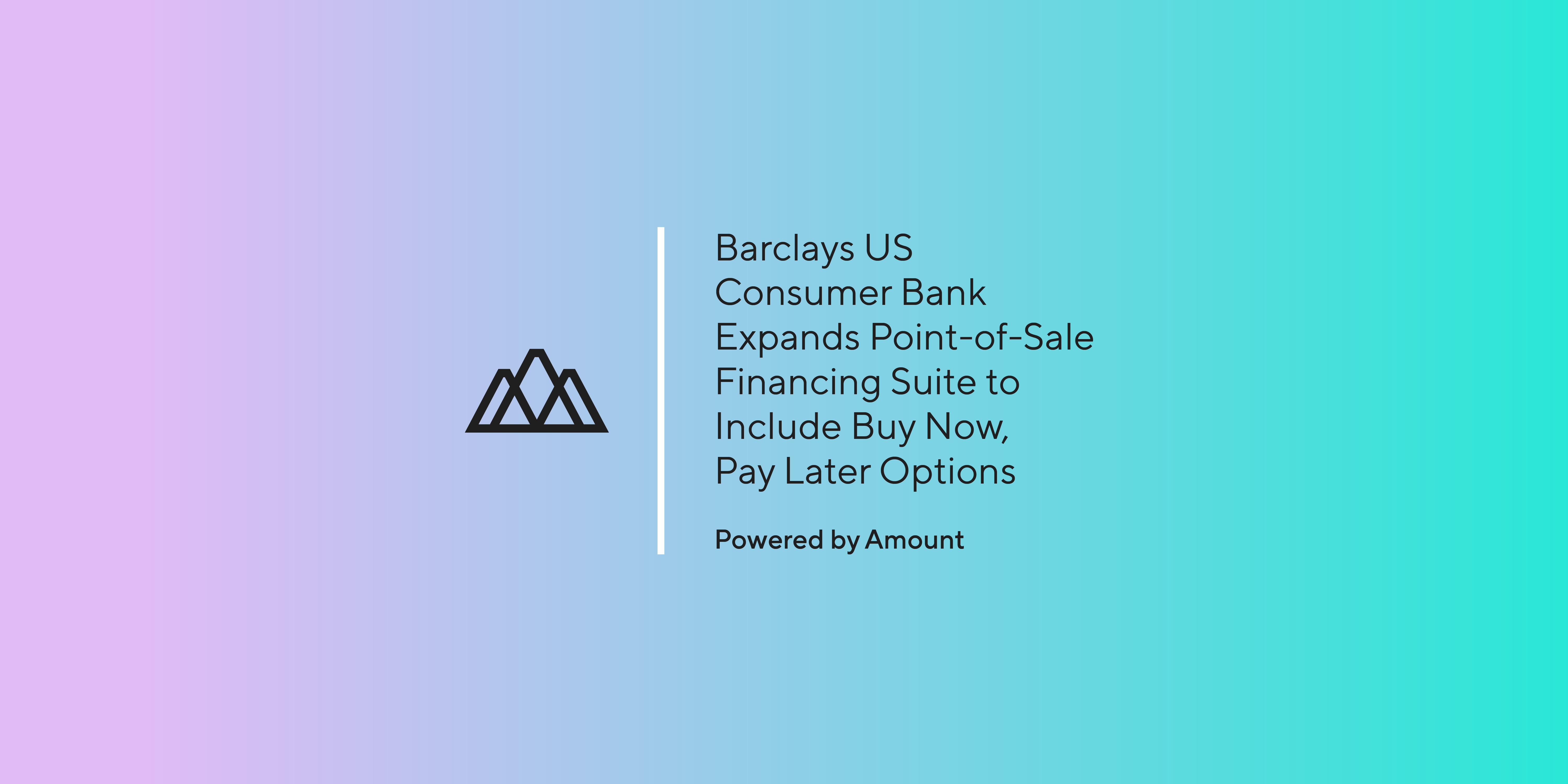 2020 has come and gone, and while the year exposed major gaps across nearly every industry, it also set the stage for massive opportunity.

Looking back at the year, point-of-sale financing was the hottest sector in FinTech with leaps in consumer adoption across generations — driving significant growth and investment. With the exception of 2018, there have been year-over-year increases in cumulative funding poured into the point-of-sale financing space, leaving investors optimistic about this space and its growth potential.

However, most of the players currently dominating this space are emerging FinTechs, like Affirm and Klarna, ultimately leaving traditional banks out of the equation.

How are traditional banks responding to this trend? And how can they best compete in this environment with the help of FinTechs?

Enter Barclays and Amount, a new partnership that is sure to expand the possibilities and potential of buy now, pay later (BNPL).

In a recent press release, Barclays US Consumer Bank, a premier financial services partner and co-branded credit card issuer in the United States, announced that it has partnered with Amount, a leading technology provider for financial institutions, to become one of the first major U.S. banks to offer point-of-sale (POS) financing installment options.

With the announcement, Barclays will also be one of the first providers to offer merchants the option of a POS payment under the merchant’s own brand, which presents a unique opportunity for them to deepen connections with their customers.

Adam Hughes, CEO of Amount, and Denny Nealon, CEO of Barclays US Consumer Bank, shared their thoughts on the new partnership, highlighting what it means for both organizations and the impact of buy now, pay later on the payments space.

Why is it critical for banks to enter the point-of-sale financing space now?

Over the past year the point-of-sale financing market experienced tremendous growth, resulting in a $680B opportunity for emerging FinTechs and ultimately merchants.

We’ve seen consumers dial back on credit card applications and turn to installment payments at the point of sale instead. Retail merchants are seeing this change in behavior and are scrambling to provide the right mix of options for the modern consumer. Banks and financial institutions need to be able to empower merchants to do so now.

Competition in this space is at an all-time high. Banks that are exploring the idea of offering POS financing options need to enter the market quickly. McKinsey estimates that in a matter of 18 to 24 months, laggards will be unable to compete because either most merchants will already have POS financing partners or they will need to pay a heavy premium to get into the market.

Why now? What led to Barclays’ decision to offer point-of-sale financing options?

As Adam mentioned, merchants are recognizing the changing nature of the retail industry and the need to keep up with consumer demand. For us, that meant enabling our partners to keep up with that demand.

Our goal has always been to put our partners and consumers first by meeting the demands of the modern banking landscape. In this case, that means giving consumers flexible options to buy the goods they want, how they want, when they want. Our goal is not to innovate for innovation's sake, but rather to solve problems that consumers are facing in the market.

Offering point-of-sale financing also furthers diversification of our business and provides Barclays with the capabilities to meet the needs of our business partners and consumers.

With strong competition, how can FinTechs help banks build a meaningful and sustainable customer base?

FinTechs are positioned really well as a vital infrastructure player in this space, so there is a great opportunity for financial tech providers like Amount to partner with incumbent banks long term.

Our goal is to create the best merchant experiences we can by delivering seamless checkout experiences and intelligent payment alternatives.

Retailers expect technologies that seamlessly integrate into their check-out experiences. We prioritize and match those requirements to ensure that their customers are receiving the most relevant and personalized experiences.

Ultimately, FinTechs need to do just that: prioritize their product roadmaps in a way that aligns favorably with the needs of the merchants and broader market. If they can provide the speed, agility and capabilities that create better merchant experiences, they will enable banks to stay on the cutting edge, leaving them likely to find sustainable success.

Consumer demand for versatile payment options, coupled with a boom in e-commerce during a global pandemic, has led to 200% growth in BNPL. Are BNPL payment solutions destined to become a commodity? Is the only value-add to drive cost-efficiencies?

BNPL solutions are far from becoming a commodity. More and more retailers are seeking BNPL solutions as a way to differentiate their brands while driving more brand value and loyalty — “cookie-cutter” payment options in the market just don’t provide that value.

Merchants want to work with providers who are willing to innovate and help them create custom programming for their customers. With our partner-centric approach, we’re able to give merchants just that: customized payment solutions and loyalty programs.

We’re a one-stop-shop for merchants. Our goal isn’t to provide just another transactional revenue channel. Instead, we seek to be an impactful partner for the country’s most successful travel, entertainment, retail and affinity institutions to help them capture and grow customer loyalty.

Merchants that sign on with Barclays also get competitive rates, given our strong balance sheet and better cost-of-capital advantages, and they’re better equipped to offer greater stability though economic headwinds.

It’s no surprise that traditional banks might be feeling vulnerable to disruption right now. With new competitors and technology quickly setting new standards for banking, merchants are putting pressure on banks to provide them with what they need.

POS lending requires more than next gen customer experience — it takes the ability to rapidly scale.  As Barclays trusted financial technology partner, we can get them to market faster and help them scale the business without increasing risk. Our highly reliable and flexible platform drives simple, personalized consumer application experiences that easily integrate into a merchant’s check-out experiences.

We work in partnership with banks to constantly test, experiment and optimize data sources and models to not only mitigate risk, but to dynamically uncover new opportunities for improvement. In a fast-growing market like BNPL, a FinTech partnership can help banks rapidly scale and optimize with agile precision so they can be extremely competitive out of the gate.

We value FinTechs’ ability to find — and quickly fill — gaps in the market. Combining these strengths with Barclays’ is more powerful than Barclays trying to “be the best'' at both. Partnering with these expert innovators is truly the most efficient way for us to bring many of our products and services to market.

We chose Amount because of its proven technology, ease and speed of integration and deep knowledge of digital financial services. Amount also shares a similar consumer-centric approach to execution, something that’s important to the integrity of our partnerships.

Banks are without a doubt experiencing a tremendous amount of pressure coming out of a year defined by digital transformation, but they’re also being presented with a significant opportunity. If they lean into partnerships with point-of-sale providers like Amount, they have a great chance of competing with the best of them. 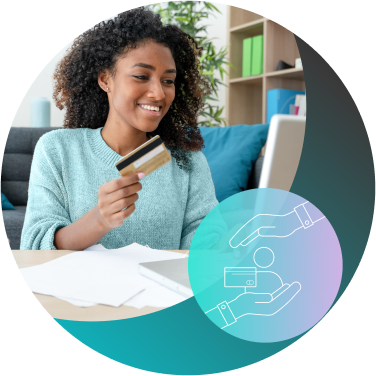 Learn key considerations when selecting the right BNPL partner for your business in our blog "Buy Now, Pay Later Partnership Models: Which is Right for your Financial Institution?"